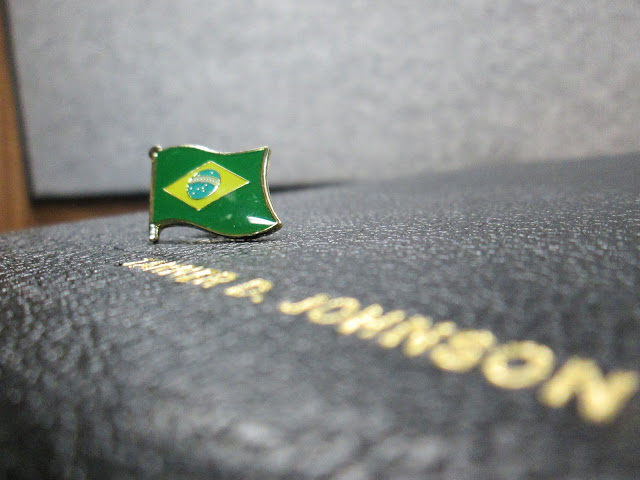 Things have been going pretty well here in Aracaju.  It's pretty hot down here and everyone is pretty nice.  The food out here is mainly beans, rice, and lots of meat so I really can't complain, oh and lasagna, pretty weird.  My companion right now is Elder Godoy and I think he's doing pretty good.  I'm not entirely sure because he only speaks Portuguese.  We had our first baptism the other day.  It went over really well and our convert has a lot of faith.  At least I think he does, I'm still not quite sure what people are saying.

For Easter dinner I had some Brazilian bagel bites so that was pretty sweet.  They have the Easter bunny down here and the night of Christ's crucifixion everybody gets drunk and parties in the street.

So some things about life down here:

I live right across the street from a slaughterhouse.  There is a lot of...activity in the morning filled with much clucking and mooing.  Whenever I get the chance to walk by it throughout the day I hear the sound of clucking and then a loud WHACK! and then the clucking stops, so that is pretty neat.  My house does not have hot water and has lots of spiders.  We also have a little lizard that hangs out and eats most of the bugs so that is pretty cool.  After awhile though you get used to the way of living down here and it's not too bad.

Apparently the other day when my companion and I stopped for a soda break an apostate came up to me and started yelling at me.  It didn't hurt my feelings too bad, probably because I had no idea what he was saying.

Rapaz! (pronounced hapiez) is a word that everyone here loves to use and they use it for everything.  Apparently it is only a nordeste (northeast) thing and it translates to "young man."  They like to use it like an "oh boy" kind of thing and I love it.  It makes me smile whenever somebody says it.

I got confused for a Brazilian again yesterday and my native companion was confused for an American.  We both started laughing and I felt proud of myself for blending in so well.

Kids here are merciless.  They are always talking to me really really fast and like to tell me how easy Portuguese is.  They try to teach me things to say that is pretty nice.  The language is...coming...I have no idea what anyone is saying to me here so I'm just kind of making it up as I go.  I will get it eventually though!!

Anyway, that is about it for the week.  If anyone emails me and it seems impersonal, rushed, or if I don't respond for a week or two I'm so sorry.  I only have an hour to email and it's pretty crazy.  Keep going strong and have a great week.


P.S.  I heard "Monkey Wrench" from the Foo Fighters the other day so that was a pretty sweet tender mercy.