Well, I am slowly starting to feel more and more Brazilian.  About once or twice a week people tell me I look Brazilian and my companion from Parana Brazil looks American/Chinese/Spanish/Japanese.  Which is funny because he looks like none of these.  I am starting to develop some pretty sweet tan lines.  My favorite tan line is this white stripe I have where my watch covers.

On Tuesday they sent me up to Maceió to finish my Visa papers and that was like a little mini vacation for the day.  This week was also transfers and they added another companionship to our proselyting area in Siquera Campos.  Our house is very small and we all barely fit, but it is all good.  Our new roommates are funny and they keep things interesting.  I went on divisions with one of them the other day to show him around our Siquera and kind of showed him where everything is.  I felt really cool.

There are some benefits to being American down here.  When we go contacting we always say where we are from and whenever I say I am from the United States I instantly become 10 times more interesting and they all look at me.  People also like to practice their English on me and they like to ask me what it is like back home and what I like about Brazil.  They also say they like my accent.

So this week everyone was in cahoots with the adversary.  We had like three different anti people come and talk to us:

1.  We met this one guy when we were leaving the LAN House (where we do emailing and such).  He was from one of the local churches and he talked forever about the Holy Ghost and the spirit world and it was more annoying than anything.

2.  Another guy we met while contacting and he talked for like 15 minutes about how all the churches were true while implying ours was the only one that was not.

3.  And another guy we met contacting who when we entered his house pulled out a Bible, sat us down, and talked for about 90 minutes about Adam and Eve and original sin.  At the end he told us we were doing a good thing and that we were really trying, BUT we really needed to study the Bible more and that we really did not know that much.  I was so mad.  So we bore our testimonies then got up and left.  They guy said he wanted us to come back Saturday...

Also, another weird thing.  Someone gave one of our investigators this Anti Mormon article printed from the Internet randomly one day.  He showed it to us and we talked about the importance of daily prayer and scripture reading.

None of these experiences were damaging in any way.  It only confirmed to me that our work is so true and that we are out here for a righteous cause.  None of this stuff would happen if the church was not 100% true.  It really is such a testimony builder to see all of this opposition.  Nevertheless, it is still annoying.

So this week I decided to make an "Undeniable List."  I got the idea to make a list about all the major spiritual experiences I have had over the years, so that if there ever came a time in my life when I feel  my faith is dwindling I can look back at this list and say to myself that if I were to say any of these experiences did not actually happen and I did not feel what I felt or saw what I saw I would be a liar.  And one of the crazy things is when I started I could not really stop.  The list kept growing and I just thought how dang true this gospel is and how there is nothing that can say otherwise.  This church is so true and I know it with everything I have got.

Until next week,
Tanner 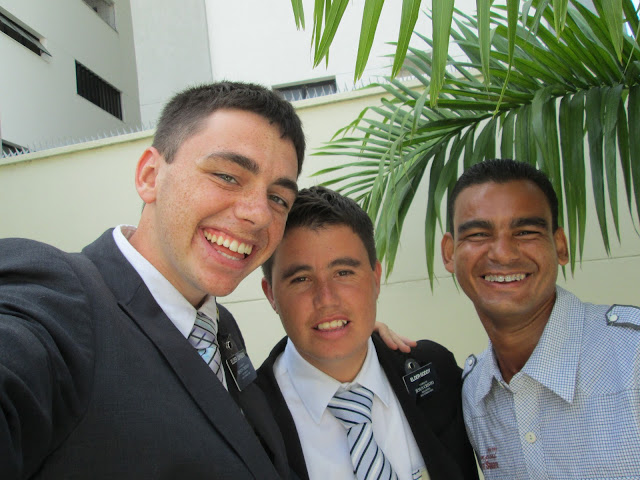 This is Marcio Freitas Dos Santos.  He is our recent convert and he was the one who received the anti material.  We took him to conference in downtown Aracaju and let me tell you, he is a firm convert and has an amazing testimony.  He got in a motorcycle accident about a year ago and was in a coma for eight months.  When he woke up his dad had a stroke so he spends his days now taking care of his dad.  He is a really awesome guy and is way sick!!!