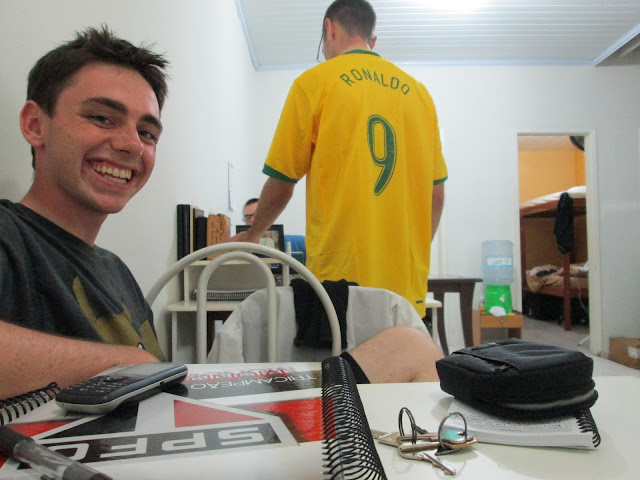 So for your information mom, transfers work like this...

Sunday night we get the call from the District Leader who will say either:  you stay in your area, you go to Maceió, or you are being transferred but staying in Sergipe.  On Tuesday we had the actual transfers and everyone who is staying in Sergipe comes to spend the night in Siqueira because that's where the bus to Maceió leaves from.  The bus leaves at about 2:00 a.m. and then they're on their merry way up to Maceió.  We then wait for the transfer meeting down here and everyone in Sergipe goes to the chapel and we listen to the meeting via cell phone.  We then wait for our new companions until the bus arrives.

So when I met my new companion, Elder Oliveira, it was a beautiful experience.  I asked around for him and when I finally found him (he's about a foot taller than me) he picked me up and gave me this huge hug.  It was at that moment I knew that this transfer was going to rule.  Elder Oliveira is from São Paulo, he likes Michael Jackson, Charlie Chaplin movies, and is probably one of the nicest guys I've ever met.
We also received two new Elders in our house, Elder Katich and Elder Coon.  Elder Katich is from Fresno and did a year at the U of U before he came out on his mission.  He has very good taste in music and is our new District Leader.  Elder Coon is from Draper and he was transferred from the infamous Arapiraca area.  Arapiraca only has water for about three days and then it leaves for the next 10 days.  Missionaries who pass through Arapiraca are like old war buddies.  They say things like "Hey, I wouldn't be doing this for you if it wasn't for the time we spent in Arapiraca together!

One other cool thing that happened at transfers was I had another reunion with Elder Rutledge!  I was just about to leave the chapel when I look around the corner and I see him!  There was a ward activity there at the same time and a lot of the members gave us strange looks as we embraced.  Earlier that day I was talking to some of the Elders that serve up where he is serving and the conversation went a little like this:

ELDER 1:  "Hey, is that Elder Johnson?  The one that was friends with Elder Rutledge before his mission?"

ELDER 2:  "Those scary stories you told Elder Rutledge scared us so bad that we started seeing things!!"

I then remembered that I told Elder Rutledge about some of the stories of ghosts and demons and the like I had heard from members of our ward back home and from a family member and I died of laughter!!!  I then confronted Elder Rutledge about it and he busted up laughing.  He told me they were really so scared.  All in all it was a beautiful reunion.

So Brazil won the Confederation Cup yesterday!!!!  We were sitting in our house planning and we could tell that Brazil made a goal because there would be lots of screaming followed by the sound of what appeared to be Nazi Germany bombing London.  Everyone would start throwing fireworks and it sounded like we were being invaded.   #BrazillianPride

Speaking of bombs - the festivities have yet to end.  This last week was São Pedro (again, nobody knows who this guy was, bot they still celebrate him anyway).  We has to turn in a bit early the past few nights, not because I'm a lazy missionary, but because it literally got too dangerous for us to be on the roads with all of the Busca Pés in our house!!!  We were talking outside with a recent convert and then I heard from behind me, "Oh, I think I'll throw it at the Mormons."  The next thing I heard was Busca Pés exploding next to my ear and I lost part of my hearing for the next few seconds.  Things were blowing up in the roads and people were making fires next to their house for no other reason than to make a fire!!  Some of the kids at night started throwing Busca Pés in our house!!!!  Which, in truth, wasn't actually in our "house house" more like the little gated area we have before you enter the main house.  So me and Elder Oliveira, trying to sleep, got up and left the house with complete intention on cursing those wicked children with some good ole fashioned she-bear action!!  They ran away before we could rain fire and brimstone down upon them, but I still wasn't too happy about the whole situation.

Oh, a quick note for anyone who has written me a letter, I'm sorry if it appears like I haven't written you back.  I generally follow the "you write me a letter I will definitely respond" kind of rule, but the Brazilian postal has proven to be a rather big pain and may have stolen your letter or the letter I wrote to you.  Oh! and mom, I have gotten the express envelope with my friend's mission blog updates.  I got it like two weeks ago and this past week I got the huge envelope full of shorts and stain cleaning supplies (you mailed it on April 16).  I also got the mosquito net package about two months ago.

So a cool experience, last week when the other Elders were saying goodbye to their converts we visited one.  They shared their testimony and this man started to cry.  I really wasn't expecting it because he's a bigger, tougher guy, but he said something after that really touched me.  "I've told you guys a couple of times already, but I know that Heavenly Father sent two angels to my house to give me this gospel that changed my life."  Like that touched me rather a lot and I've thought about it a lot since then and its experiences like that that make missions amazing.

I will leave you with another conversation I had with some guy who could speak English last night.

MAN:  You don't need to be scared.

MAN:  I lived in the states for about five years and it made me rich and now I live back down here.  Tell me your story.

ME:  My story... Well, I lived in Utah for about 19 years and now I'm down here serving a mission.