For The Glory Of My Future Spouse 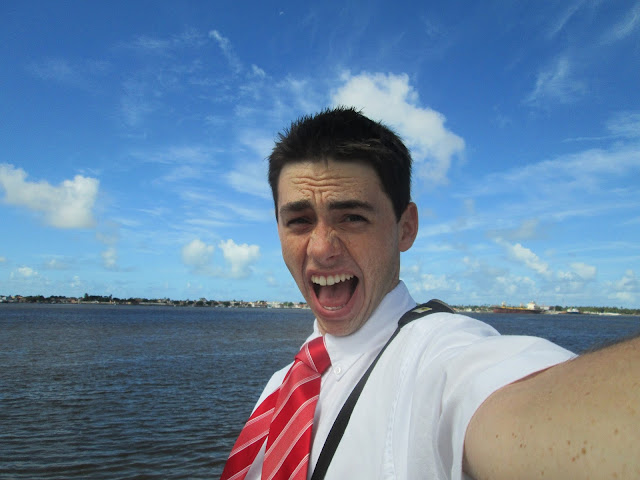 So this letter is probably going to be more of a rant than my usual format, so sorry.  It is in no way a negative rant, just a rant in general.

Last P Day we went into the Center District of the city, which is like the financial heart of Aracaju.  They had all sorts of goodies there and there were tons of people.  They even had a Jesus statue like the one in Rio, but it was only about 15 feet high.  It still was cool.  I was able to pick up some knick knacks while I was there and they had a lot of stuff I want to buy before I come home from my mission.


I have bought myself a São Paulo Futebol Club shirt and it has since polarized my relationship with some of the other Elders in the zone.   #SPFC4LYFE   I also took some money out of my bank account mom because the American dollar went up in value so I decided to make my move and jump on it while I could.

I went on a division with the zone leaders again and it was pretty awesome.  Their area is the more touristy part of town so it's a pretty cool area.  He was able to show me how to work more with the spirit and I really felt a difference in the work as we strived to listen to the spirit more instead of just going.

One thing about my area is that it's filled with crazy people and drunks and for some reason they think we want to talk with them.  Generally you can see them coming down the road and think, "Oh man I really hope they don't talk to me."  Usually they do end up talking to you and it's just a big waste of time.  I know it sounds harsh, but it's like the same thing with giving money to the beggars around, you're just wasting time and money.  With the crazies you could tell them to come to church or something, but they won't.  They just want to say something stupid to you and then waste your time while you're late for your next appointment.  With the beggars they're either faking it or your money would just be spent on drugs so that's pretty dumb.  There have been many who have told us that we're a cult or say something else dumb so we usually run away from them.

There's this road that runs next to the local church that we usually take home.  The other Elders said they saw someone get robbed on it the other day and it was also the same road me and Elder Godoy were robbed on.  The day before we had another crazy person tell us we were a cult so we were kind of on Death Con 1 going home.  We were going home one day when we heard this voice calling for us and Elder Oliveira said we should walk faster so we started gong a bit faster.  This voice from the dark was still calling for us so we walked even faster.  The voice then called out, "Elder Oliveira!"  Elder Oliveira said to me, "Elder Run! The thief know us!!!"  A few moments later a very tired and very out of breath member caught up with us and we walked merrily home without ire!

We've been having issues with our power as of late.  The power in our house, only our house, decided it was too cool to work so we've been without lights, hot water, a fridge, and fans for a few days so that's made everything fun.  The church sent Mr. Helpful (some guy who does maintenance for the church) to come and help us.  We found out a way we could turn the lights back on by flipping the breaker, but the breaker has since decided to stop working also.  He did it and all the lights turned on, but it wasn't a permanent solution, only temporary.  We told him everything would go out again, but he seem convinced that it would stick this time.  Low and behold the lights went out permanently once he left so he should be back to finish it permanently today.  It's very hard to do weekly planning with only flashlights as lights and thank you for the mosquito repellent mom, it helps a lot.

The other day it was raining, a lot, and we had one last investigator to talk to before we could go home.  Only I had an umbrella, but it was obsolete with the manner of heavy rain we were getting and wouldn't protect me and Oliveira.  We decided that we had to see this man so we ran out into the heavy downpour and the roads, which in reality were rivers.  We arrived at his house with a speed that would've made my high school gym teacher proud, but he decided he wanted to sleep so we had to return home.  We were left standing under this awning.  We then looked at each other and yelled, "Pela gloria de minha futura esposa!!!" ("For the glory of my future spouse!!!") and we ran out into the rain and all the way back home.  Was it amazing?  Yes.  Was it cold and wet?  Of course.  Was there an adrenaline rush?  You bet.  Have I been a little sick since then?  Sadly yes.  Was it worth it?  Com certeza!!!  (Sure!!!) 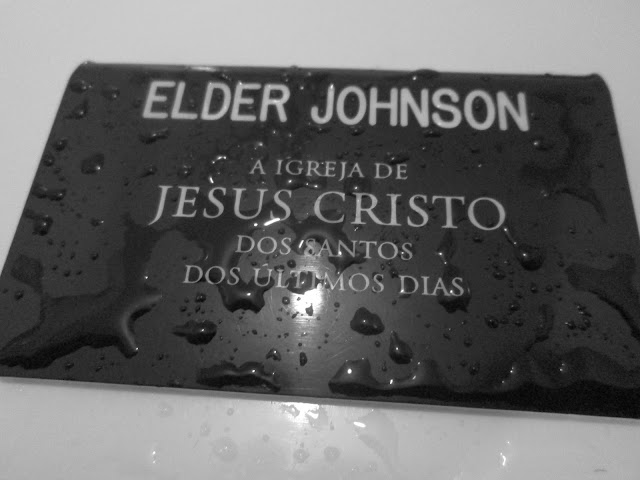 Posted by Rekehl Johnson at 4:35 PM