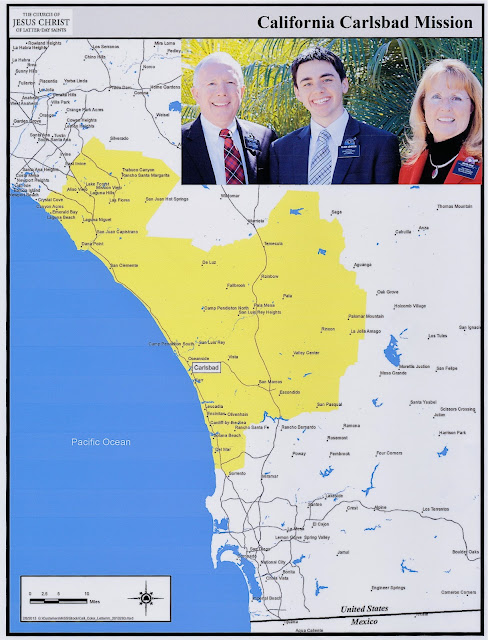 Hey Everyone!  Hope everything is going well.

So, this week is going to be kind of short because I'm just going to write about things that pop into my head.

I arrived in San Diego the other day and we were picked up by President Cook.  He's really nice, super smart, and from what I've heard has really turned the Carlsbad Mission around and made it one of the highest baptizing missions in the US.  We went over to the mission home and got to have a little orientation there.  He told me that they will literally give me two days notice once I get my VISA (we can say it now that we're out in the field) and then I'll be on my merry little way; so there's a chance my next email might be from Maceio!  My companion is Elder Graham, he's from West Jordan, and was really into Parkour and robotics before he left.

My first area is the Oceanside 4th Ward.  We are located a little north of Carlsbad and we are right next to Camp Pendleton.  We get to go to Camp Pendleton and teach the families who live on base and that's always cool to go out there.  It's very hilly here so by the time I get to Brazil my cardio is going to be amazing.  Also, there are three things I have learned about Southern California

1.  There are very few sidewalks.

2.  They don't believe in lamp posts.  By the time it's about 7:00 pm the whole place is pitch black because there are only lamp posts on the main streets.

3.  People go to bed at like 8:00 so the last hour of proselyting is a bit difficult because there is no one walking around and no one answers their doors.

Had a weird, out of time, experience.  I've only been on my mission for about two months and we were driving past a movie theater and they had "Die Hard 5" playing there.  I was legitimately shocked.  I had no idea that movie was coming out so soon and then I wondered where I've been for the last two months.  Time really does fly out here.

The weather here is lovely and the people are pretty nice.  So yeah...that's about all I can think to write about right now.  I'll just leave you with a conversation we had with this guy on the road.  We were late for an appointment so we weren't trying to contact him, but he told us about his day anyway.

Guy In The Road:  How's it going?  Oh it's going great!  I just got off work with a bunch of knuckleheads who don't know how to mix concrete to save their lives!!!

Guy In the Road: PFFFFTTTT yeah!!!  So, I'm exhausted and I'm going to go inside and have a beer with my dog!

Guy In The Road:  Hey, what church are you from?

Guy In The Road:  Oh, you're Mormons?  Well, I'm Christian.  You know the King James Bible?  Yeah, I make sure to read it every night before I go to bed!  It's the only thing that helps me get through the day and gives me direction in my life!  Now I respect your religion and I know you Mormons are good people!  But, I'm currently happy with my relationship with God so I don't think I'll be needing anything from you today!