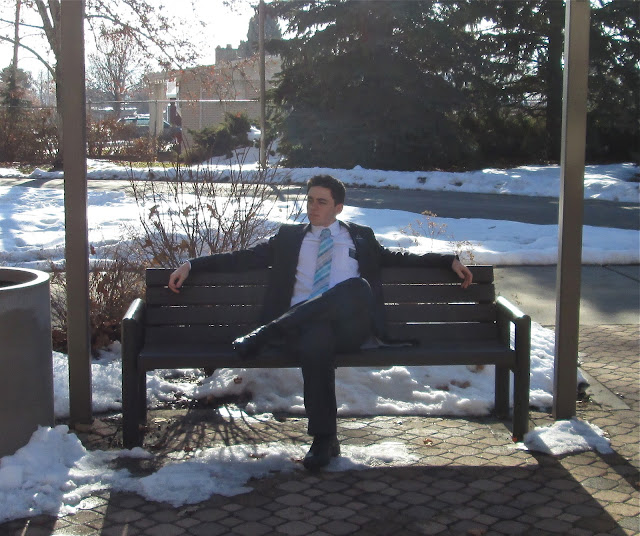 I think it's week seven and I have a lot to write about.

The first story is up for you to share mom.  It's kind of gross, but something very eventful.

So this week I went to the podiatrist because I've had this invincible wart on the bottom of my foot that won't die and it hurts to walk on.  The doctor literally gave me the ultimatum:  pain, pleasure, or weird punishment.

Pain: two shots.  One shot to numb your foot and the other shot is an anti-cancer medicine which causes necrosis.  It is guaranteed to kill, but it hurts a while for days after and turns your foot black.

I opted for pain because it was fast and effective.  The doctor gave me the numbing shot in my ankle and told me to wait a few minutes.  He asked me if I was feeling okay and i told him I was and then he left the room.  Literally no more than five seconds later I got very light headed and started to faint.  He came back in the room with a nurse and they just kind of looked at me.  All I could say was, "you tricked me."  Because I literally thought he gave a shot to me to make me fall asleep.  Eventually I got over myself and sat up.  Apparently this shot has the slight side affect of making you faint and he said I was white as a ghost.  I waited a good 45 minutes and drug hadn't worked on me and my foot wasn't numb at all.  So I just decided to take the anti- cancer shot straight up.

Have you ever had a shot in the foot?  It's really painful and the doctor shoved that bad boy needle in my foot and left it there for a solid minute and a half.  I could literally feel the medicine entering my foot and killing my cells instantly.  I felt like my foot was literally on fire.  The most pain I have ever been in in my entire life.  (Mom, I thought you said this mission thing would be fun?)  After much weeping, wailing, and gnashing of teeth, I got over myself, yet again, and the doctor told me that this procedure is probably the most painful thing he does as a doctor.

On a lighter note, I got to be a Host Missionary right after and I got to show several new missionaries around.  My first missionary looked like he had just ran through a mine field and had this shocked look on his face of, "Oh no, what have I done?"  My second missionary was from Fiji and didn't speak a lot of English.  My third missionary was Jeremiah Romney and he was going to Russia.  It was great to see a familiar face and it was great to escort him.  I took him to the Russian dorms and there were a bunch of Elders sitting on the stairs and they look at him and ask, "Where are you going?" and he responded, "Russia."  Chaos ensued.  About 20 Russian speaking missionaries ran into the stairwell and started cheering and shouting things in Russian.  These two huge missionaries came down the stairs, grabbed his two 50 pound suitcases, raised them over their heads, and ran all the way up to the top floor.  There was so much excitement and I naturally got caught up in it.  I started shouting and beckoning my Elder to follow me to his room.  The Russian missionaries gave me a Winnie the Pooh sticker and stuck it on my jacket.  They were really nice.

My companion, Elder Jung, got his VISA to Brazil this week and is leaving to Maceio on Monday.  Everyone in our district was jealous and next week I get to be a solo missionary, so that will be interesting.

Valentine's Day was funny.  I got your package mom and I literally have no idea what to do with all the toys you sent me.  I always have to hide them when the branch presidency comes around and I'm pretty sure all the sugar is going to make me diabetic.  Thank you very much, it made my day along with the "Heart Attack" from Julee Higgins.  The district in the rooms next to us were talking about their girlfriends, how they miss them, and all the great memories they had.  I just nodded and said, "Pfffffttt yeah!  I miss my girlfriend too!"

So the district in the rooms next to us just left for Portugal.  They were really cool and we became pretty good friends with them over the past few weeks.  They were really funny and we were able to joke around with them.  A lot of the "Como se diz..." from last week's letter came from them, and the girlfriend conversation, and the Elder we tied up was from there.

The MTC is packed and I literally don't know how they're going to quadruple this place in size over the summer.  It takes  f o r e v e r  to get food and there is literally no room to stand.  Also, Happy Birthday to Mama Wood and my cousins Jonah and Erin!  Have fun and be nice to Flat Tanner at your parties.  A teacher here from Brazil told me I looked like I was from south Brazil and she asked me if I had any Brazilian in me.  I felt really cool.  Oh, and congratulations to Brooke for getting her mission call to Boston, Massachusetts and to Clafflin for getting his mission call to Taiwan!  You two will do great in your missions and the spirit is going to change you for the better!

This week we gave a lesson on the Atonement to one of our investigators and it was the best lesson we have ever given.  The spirit was so strong and the feeling of peace that comes through the Atonement is incredible.  We had a fireside this week from one of the guys who sits with the apostles when they assign mission calls.  He talked about miracles the whole time and told us some pretty crazy stories about how things always seem to work out.  The gospel is so true and the feeling of peace and love that the spirit brings is amazing.

Let me know if there is anything I could do for you back home.  And for those going on missions know that you will not regret it.  There are times when it gets hard and you feel like you can't do it or it's too big for you.  Just remember your Heavenly Father loves you and He will always provide a way for you, even if at times it is hard to see a good outcome.  Thank you everyone back home, especially you mom and dad.