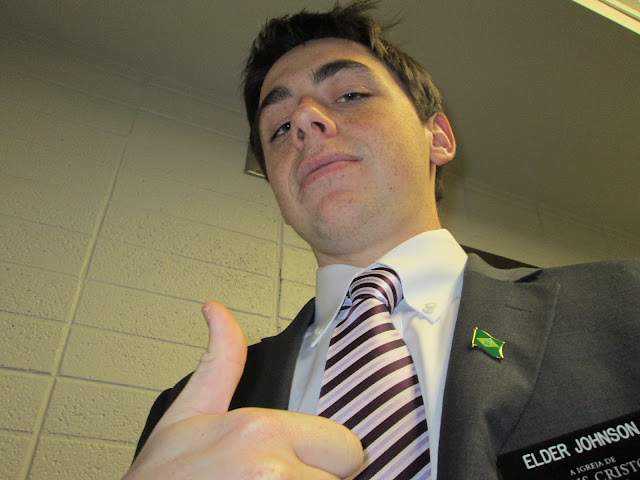 Hey everyone, how's it going?

There's not much to tell about this week so I'll do my best to summarize anything interesting.  Learning Portuguese is starting to come a little bit faster.  We implemented an FSL, Fala Sua Lingua (Speak Your Language), program so we are pretty much required to speak Portuguese tudo dia tudos os dias (All Day, Err'y Day).  This is by far the best way for me to learn.  When we study they like to use words like conjugation, simple pluperfect, reflexive, verb, all of which are words that make no sense to me.  I found out that the more I speak Portuguese the more things make sense and the faster I learn.  But, there still are those days when I feel like flipping a table.  I feel bad for those missionaries going to Cambodia. Have you seen what Cambodian looks like?  It's nuts.

Hey, thank you mom for the package you sent me, it literally made my week.  The best thing you could have possibly sent me in the package was the Baltimore Raven's Super Bowl Champions tshirt *.  Elder Rutledge and I just about died of laughter when I beheld its glory.  The funny thing is we have an Elder in our district who is in love with the San Fransisco 49ers.  The rest of the district came by and saw my tshirt and they busted up laughing.  I then proceeded to wear the tshirt to gym and people were wondering how I got it.  They asked me if I was a big Raven's fan and I told them about my undying love for the Raven's and my passion for the sport of football.  The next day we were doing this exercise where we get to each teach a companionship in the district and pretend they're our progressing investigators.  My companion and I were assigned to be the investigators for the Elder who loves the 49ers and his companion.  I naturally had to wear my tshirt during this investigation.  When I opened the door for them, his companion started to laugh and the Elder refused to make eye contact with me.  It was a good day.       (*Side note from his mom: I sent Tanner the Super Bowl winner tshirt as a joke because I know how much he loves football, not.  I'm glad to see he got a good laugh out of it.  I knew he would milk it.)

So, this week I started making a "como se diz" list (diz is pronounced jeez), which translates to "How do you say...?"  We usually use this phrase to ask what a word or phrase is in Portuguese.  Here are a few of  my favorites:

On a more spiritual note I was able to finish the Book of Mormon this week, which was awesome and I'm about to start it again.  We had someone come and speak to us in the Sunday night devotional about the impact we make on the lives of others.  He told us a story of how he went on his mission and was able to teach this family and they were baptized.  He then invited a returned missionary to come up to talk about how he was able to teach the grand kids of this family the speaker taught and the impact that one conversion can have for generations.  Our branch presidency told us that the purpose of the MTC was not to learn a language, but to become converted to the gospel.  When Elder Holland came and spoke to us he read a scripture in D&C which says something along the lines of "how great your joy will be if you bring just one soul unto Christ."  He then said that that soul better be yourself.  I've felt myself grow immensely more spiritual over the past few weeks and I'm so grateful that I can be out here serving my mission.  I hope everything is going well and I'll write again next Tuesday.

Posted by Rekehl Johnson at 4:56 PM