It's Good To Be In Brazil.

Well we got the transfer call and it looks like I'm staying in Soledade with Elder Coon for another transfer.  I'm excited, this last transfer was pretty legit and it ended very well if I do say so myself.

So on Saturday we had the baptism for our investigator Clécia and it was awesome!!  Before her baptism she managed to read the entire Book of Mormon all the way through and is currently in Alma.  She also got to read the whole Gospel Principles manual.  Before her baptism she got up and bore her testimony on repentance and it was just amazing.  The next day she came to church all happy and I had the privilege to confirm her.  She had a lot of her family come to the baptism and they had a bunch of questions afterwards so we'll see how it goes with them.  All in all everyone was just super happy and it was a great success.

To celebrate our day of extreme happiness, we added even more happiness to the equation by buying Açaí.  Açaí is probably one of the greatest things known to mankind.  It's this fruit they take from the Amazon and they freeze to ridiculously cold temperatures.  They then add a bunch of stuff like nuts, strawberries, pineapple, bananas, and granola, which makes it probably one of the tastiest things in the whole wide world.  You can't help but just smile while you eat it.  You take a bite and just smile from ear to ear.  The stuff gets you amped too, with its natural energy and what not, you just feel like you're on top of the world and that you can do just about anything. 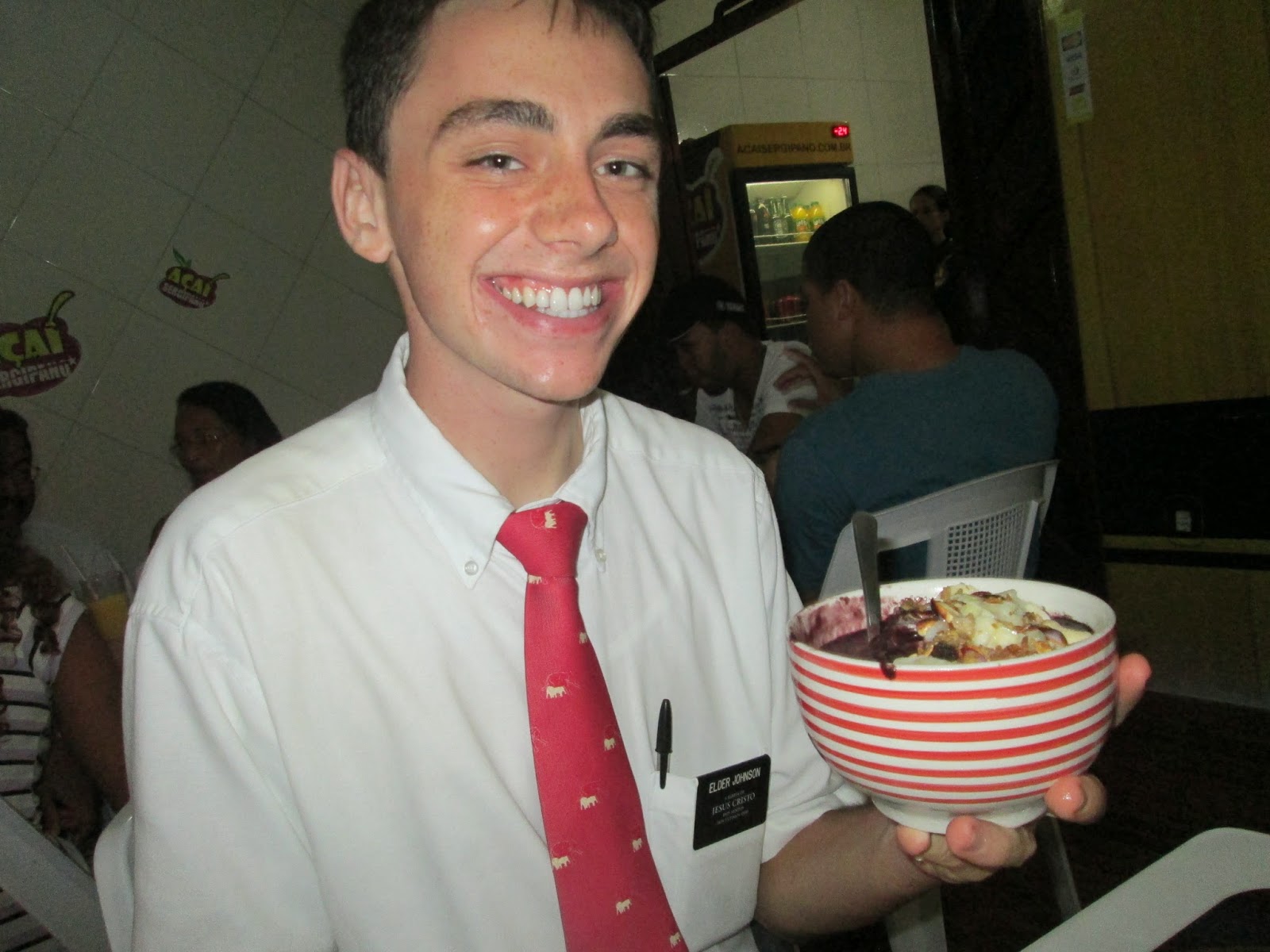 So some funny things this week:

I became a plumber this week.  Our drain got backed up a bit so we had to find a way to unclog it.  We used The Most Sophisticated Brazilian Missionary Plumbing Tool we had with us, a wire coat hanger, and I went to work.  It was a pretty easy fix.  For some reason what appeared to be the stick to a tootsie pop got stuck in our shower drain, which makes no sense because tootsie pops don't exist down here.  All in all I saved the day and I'm so great and a hero and what not now.

Members of the church down here know a thing or two about English that they've learned from missionaries or companions on the mission.  Everyone knows words like:  Crazy and Freaking.  The other day I heard someone say, "Holy Cow" and I just about died of laughter.  I've never heard that one down here before.

So I heard a new rumor about the Mormon missionaries down here, which is "The Mormons are here to suck peoples blood."  That was a new one.  I'm adding that to my list of crazy things people say about us, which includes:


Yeah, us Mormons are pretty crazy.  There was also some guy who wanted to Bible bash with us while I was on a division and resorted to just telling us a bunch of other crazy stuff.  In the end he said God told him to date his cousin so we just left him there.

Well, overall this was a pretty sick week.  We should be having another baptism this week, which was actually a surprise. This lady in our ward came up to us and asked us if we could baptize her fiancée who was been going to church for over five years.  Nobody knew that he wasn't baptized yet, so we should be getting a free baptism this week!  Pretty great huh?

Well I'm glad you're all great back home.  Sounds like Ethan's baptism was a hit.  I heard the speaker you guys had did a really great job or somethin’.  (FYI: Tanner made a surprise video that his family played at his brother’s Ethan’s baptism and it was great!).  Congratulations Ethan and congratulations Ryan for performing the baptism.  Anyways have a great week everyone and I'll talk to you all next week.

It's good to be in Brazil.

Posted by Rekehl Johnson at 2:10 PM